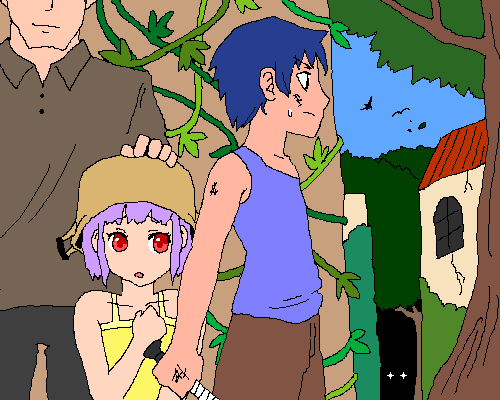 The Destruction of Japan

5 years ago, a meteorite fell into Mt. Fuji, causing it to erupt. 3 days later, an unknown epidemic spread through all of Japan. Onset of symptoms would begin immediately after infection. First the infected would present a high fever, after which they would lose consciousness. The mortality rate climbed exponentially depending on the age of the person infected, with 100% mortality rates in those 20 or older. Of those who lost consciousness, it was only the children who opened their eyes later. With all working adults dead, the infrastructure immediately collapsed. Massive fires broke out in places across the country.

The children gathered in schools or other public buildings and created Camps where they could live. From the ashes of the great fires, new growth began to emerge. These plants grew at a supernatural rate, and soon all of Japan was shrouded in deep forest. In the forest, unnatural life-forms such as horned rabbits and giant insects began to appear. These unnatural changes were not limited to the flora and fauna either. Changes began to appear in some of the human children as well. Some grew to full adult stature at just 10 years old, some had strange hair colors, and others began to show supernatural abilities. The changes were diverse.

Now, human society is divided into Camps, where survivors gather to live together in the midst of the forest. For food they generally collect and eat non-perishables, but recently they have also begun hunting the beasts of the forest to eat their meat. The space between Camps is obstructed by deep forest, and direct communication between Camps is extremely difficult. Though electricity and TV are obviously a thing of the past, some Camps that have a means of producing energy use amateur short-wave radios to broadcast information. Some of the larger cities contain communities made from groups of Camps, and often these areas conduct radio broadcasts.

In the forest there are dangerous areas known as <Fields>, each ruled over by a powerful <Boss>. During the 5 years since the fall of society, most of the resources available in the relatively safe areas have been used up. In order to gather resources, the remaining humans need to conquer the <Fields>. Also, sometimes <Fields> may form between two Camps, cutting off their ability to communicate and trade. In order to re-establish a connection with the other Camp, the <Boss> must be defeated and the <Field> cleared.

Those that challenge the <Bosses> to clear the <Fields>, fully aware of the danger involved, are known as Adventurers.

LOST TRPG was created by Hibo (@hibohiboo), whose website can be found here: http://asuwa.mistysky.net/s/Survival.htm